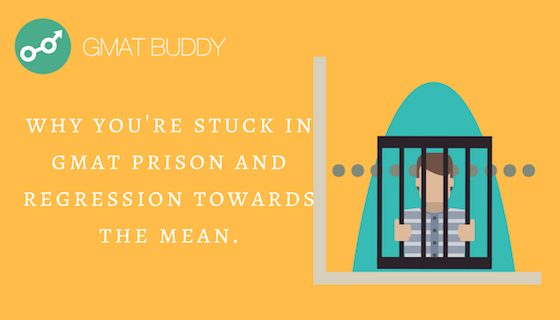 There are two main reasons your GMAT score dropped on the retake: A phenomenon and your approach, and the phenomenon applies because of the approach.

Reason 1: Regression towards the mean

Regression towards the mean is the phenomenon that if a variable was extreme on its first measurement it will probably be close to the average on its second, and if it’s extreme on the second measurement then it must have been close to the average on its first. In other words, if you’re an average basketball player and score on a first shot, you probably won’t on the second.

With regards to the GMAT, a score of 670 may well be on the upper end of your range and simply repeating the test without any meaningful change in your ability will likely result in a lower score.

Reason 2: Why you scored less (or same) on the second attempt

This is based on your approach to studying. The GMAT tests the ability to think logically and critically. Simply repeating practice problems or doing more is not enough. What matters is not how many questions you do, but how you do them. Focus more on improving your ability to understand problems than on learning how to solve problems. The latter naturally follows from the former. Creating a large archive of methods to solve problems could be helpful, but it is not as important as improving your ability to understand problems.

This explains why many prospective test takers spend months preparing for a repeat and end up with the same or lower score:

They did not improve their ability to understand and their score continued hovering over their mean.

So how do you change your ability?